Reverse osmosis is a technology that uses membrane separation; it is a very efficient process that removes most ionic, organic and suspended impurities from water. The membranes, which are available in a variety of characteristics and sizes, are able to remove up to 98 % of substances present in the water. The semi-permeable membrane will allow only pure water to pass through it, while rejecting the contaminants and dissolved solids that are too large to pass through the tiny pores of the membranes.

The treated water (product) will be collected, while the concentrated water will be rejected.
In order to understand the reverse osmosis concept, it is important to begin by understanding the basics of reverse osmosis.
1.
Basics of reverse osmosis
Osmosis
Osmosis is a natural process in which water of different concentrations and separated by a semi-permeable membrane, causes water from the diluted solution to move into the more concentrated solution. The pure solution passes through the membrane until the osmotic pressure becomes equalized, at which point osmosis ceases. The osmotic pressure is the differential pressure required to stop osmosis occurrence, and it depends on the molecular weight of the elements in the water.

Reverse osmosis
In osmosis, water flows from a dilute solution to a concentrate solution. By applying pressure in excess of the osmotic pressure, the water will flow from the concentrate solution to the dilute solution. This phenomenon is called reverse osmosis. RO systems remove both dissolved ions and organic impurities. The feed water (untreated water) enters on the feed side of the membrane at a high pressure. As a result, the concentrate is retained on the pressurized side of the membrane, and the treated water (product) is allowed to pass to the other side.

The key terms used in the reverse osmosis
process are defined as follows:
1 - Recovery
The ratio of permeate flow to the feed flow, expressed as a percentage. A recovery of 50% means that half of the water entering into the system will be rejected.

6 - Flux
The rate of permeate transported per unit of membrane area, usually measured in gallons per square foot per day (gfd) or liters per square meter and hour (l/m2/h). There is a relationship between the water flux and the rate of fouling on a reverse osmosis unit. The higher the flux, the faster is the rate of fouling.
Recommended flux

7-Semi permeable membrane
A semi- permeable membrane is a barrier that allows certain species to pass through it, while retaining others; while water and gas pass freely through the membrane, a large quantity of ions are captured. Rejection of ions depends on their valence (monovalent, divalent, and trivalent). The factors which affect salt permeation are the electrical charge, molecular weight, and molecular structure; the higher the valence of the ions, the better is the rejection of the R.O. membranes. For each positive charge that passes through the membrane, a negative charge must also pass, thereby keeping the permeate water electrically neutral.

In membrane systems the elements are placed in series inside of a pressure vessel. The concentrate of the first element becomes the feed to the second element and so on. The permeate tubes are connected with interconnectors (also called couplers), and the combined total permeate exits the pressure vessel at one side (sometimes at both sides) of the vessel. 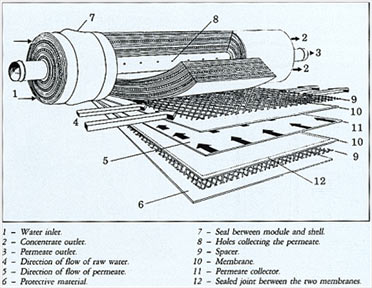 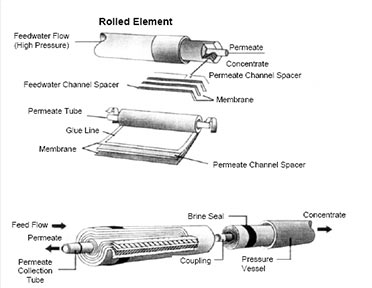 OPTIMIZING
Fouling is the accumulation of foreign materials from feed water on the active membrane surface and/or on the feed spacer, to the point of causing operational problems.

Scaling refers to the precipitation and deposition within the system of sparingly soluble salts, including calcium carbonate, barium sulfate, calcium sulfate, strontium sulfate and calcium fluoride.

Once the feed water source has been determined, a complete and accurate analysis of the feed water should be made. It is critical in determining the proper pretreatment and R.O. system design.
2-SCALING
Scaling of R.O. membranes may occur when sparingly soluble salts are concentrated within the element beyond their solubility limit. For example, if a reverse osmosis plant is operated at 50% recovery, the concentration in the concentrate stream will be almost double the concentration in the feed stream. As the recovery of a plant is increased, so is the risk of scaling.
The most common soluble salts encountered are CaSO4, CaCO3, and silica.

The various methods to prevent and control
scaling are described here below:

Acid addition
Most natural surface and ground waters are almost saturated with CaCO3. The solubility of CaCO3 depends on the pH, as can be seen from the following equation:
Ca2+ + HCO3- <-> H+ + CaCO3
By adding H+, the equilibrium can be shifted to the left side to keep calcium carbonate dissolved.

Softening with a strong acid cation exchange resin
In the ion exchange softening process, the scale-forming cations, such as Ca2+, Ba2+ and Sr2+, are removed and replaced by sodium cations.
Scale inhibitor
Scale inhibitors (antiscalants) can be used to control carbonate scaling, sulfate scaling, and calcium fluoride scaling.

Methods to prevent colloidal fouling are outlined here below:
Media Filtration
The removal of suspended and colloidal particles by media filtration is based on their deposition on the surface of filter grains while the water flows through a bed of these grains (filter media).

Oxidation–Filtration
Some well waters, usually brackish waters, are in a reduced state. Typically, such waters contain divalent iron and manganese, but no oxygen; therefore, they are called anoxic.
One method of handling anoxic waters is to oxidize iron and manganese by air, sodium hypochlorite or potassium permanganate (KMnO4). The hydroxides formed can then be removed by media filtration.

Cartridge Microfiltration
A cartridge filter with an absolute pore size of less than 10 μm is the suggested minimum pretreatment required for every R.O. system.

The prevention of colloidal fouling is not only a matter of the proper pretreatment selection, but also of the system design and operation. As an extreme example, surface water could be pretreated by coagulation-flocculation and ultrafiltration. The R.O. system could then operate with a high permeate flux, and almost no cleaning would be required. If the same water, however, is just filtered with cartridge filtration, then the RO system would need much more membrane area, and more frequent cleaning and maintenance would be required.

Biological fouling
All raw waters contain microorganisms such as bacteria, algae, fungi, and viruses. Microorganisms can be regarded as colloidal matter and removed during pretreatment as discussed previously. The difference between microorganisms and non-living particles, however, is the ability of microorganisms to reproduce and form a biofilm under favorable conditions. Biological fouling of the membranes may seriously affect the performance of the RO system. The symptoms are an increase in the differential pressure from feed to concentrate, finally leading to telescoping and mechanical damage of the membrane elements, and a decline in membrane flux.

The various methods to prevent and control biological fouling are described here below. Each method has specific advantages, but the optimum strategy is a combination of several concepts:

SODIUM BISULFITE
Sodium bisulfite can be added into the feed stream (for a limited time period) during normal operation. This intermittent application is often referred to a shock treatment. Bisulfite is effective against aerobic bacteria but not against anaerobic microorganisms. Therefore, the efficiency of the shock treatment should be carefully assessed.

Biofiltration
Biofiltration is the biological treatment of water to reduce the organic constituents that either contribute directly to organic fouling or provide carbon sources for the development of biofilms on the membrane surfaces.

ozone
Ozone is a strong oxidizing agent. However, it decomposes readily. A certain ozone level must be maintained to kill all microorganisms.

3.
Design of a reverse osmosis system
An entire reverse osmosis system consists of the pretreatment section, the membrane elements section, and the post-treatment section. Pretreatment techniques are discussed in the previous section. Post-treatment is employed to achieve the required product quality. In seawater desalination, this consists usually in pH adjustment, rehardening and disinfection.
In this section, the membrane system is addressed. The system includes a set of membrane elements, housed in pressure vessels that are arranged in a certain manner. A high-pressure pump is used to feed the pressure vessels. Instrumentation, spare parts and tools for services are added when required. A clean-in-place (CIP) system facilitates cleaning of the membranes.

The membrane system is a complete plant with an inlet for feed water and outlets for permeate and concentrate. R.O. system performance is typically characterized by two parameters; permeate flow and permeate quality. These parameters should always be referenced to a given feed water analysis, feed pressure and recovery. The goal of the designer of a reverse osmosis system is to minimize feed pressure and membrane costs while maximizing permeate quality and recovery.

Single-module systems are chosen when only one or a few membrane elements are needed for the specified permeate flow. Figure 3 shows a module containing two elements. Feed water enters the system through the feed valve and flows through the cartridge filter to the high-pressure pump.

In single-module systems, concentrate recycling is usually required to comply with the guidelines for element recovery. To achieve system recovery of more than 50%, a part of the concentrate leaving the module goes to drain, while the other part is recycled and added to the suction side of the high-pressure pump, thus increasing the feed flow to the module. A high fraction of the concentrate being recycled helps reduce element recovery and thus the risk of fouling. On the other hand, it has the following drawbacks:

An example of a single-stage system is outlined in Figure 4. Each of the three pressure vessels houses six elements.

Figure4
Multi-stage system
Systems with more than one stage are used for higher system recoveries without exceeding the single element recovery limits. Usually two stages will suffice for recovery up to 75%, and three must be used for higher recovery. These numbers are based on the assumption that standard pressure vessels with six elements are used. A typical two-stage system using a staging ratio of 2:1 is shown in Figure 5. The staging ratio is defined as the ratio of pressure vessels in two adjacent stages, upstream vessels and downstream vessels.